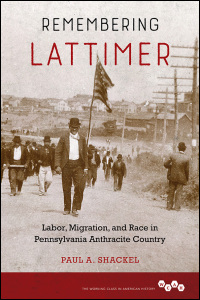 The Lattimer massacre of 1897 was one of many dramatic and violent turns in American labor history. A mass strike by anthracite mine workers in northeastern Pennsylvania was gathering steam in the summer of 1897. Immigrant workers were joining the struggle, and the mine owners and some local authorities responded with repressive tactics. In a confrontation in Lattimer, Pennsylvania law enforcement officers fired on a strike procession led by immigrant mine workers and killed at least nineteen workers and wounded thirty-eight others. The strike was a foundational event for the United Mine Workers of America (UMWA). The massacre deeply affected the region and put a stamp on white ethnic consciousness which has remained evident over the past one-hundred-and-twenty-one years. Paul A. Shackel’s book interprets the massacre in light of current events unfolding in Pennsylvania’s Luzerne County and gives the events of 1897 new relevance by comparing efforts to win rights for immigrants and immigrant workers then and now.

Labor history has become a specialized discipline over the past fifty years. Prior to Shackel’s book we have had to depend on local and regional accounts of the events of 1897, most of which have been hard to find and have not been well-documented, or Michael Novak’s semi-fictional The Guns of Lattimer published in 1978, to understand what occurred in the anthracite region at the turn of the last century. Novak stayed true to his conservative roots in writing his book and used some of the facts of the massacre to argue for white ethnic assimilation and an all-inclusive capitalism which, he argued, will provide for working-class advancement and equality. Labor and social historians have meanwhile shown that assimilation and equality are relative concepts, complex and nuanced in their details. The dominant trend among these historians has been to question capitalism’s dynamism. The University of Illinois Press has become a leader in publishing specialized and well-researched labor and social histories. Shackel’s work is especially interesting because his background is in anthropology and archaeology and because he has helped to create a community-based archaeology in the Lattimer-Hazleton area which helps us to better understand the facts of the massacre and to build bridges between disparate communities.

The labor movement has had an obvious interest in the Lattimer massacre. The strike movement which was underway in 1897 signified the rising of a new unionism which was motivated by immigrant labor at the grassroots. The UMWA was then a young organization with an unsteady hand. Previous attempts at building miner unionism had either collapsed or were in crisis. Mining work was changing, and the old forms of worker-control and relative ethnic stability were giving way as well. The anthracite mining industry was proving to be its own worst enemy. Under these conditions the UMWA vacillated between attempting to build an all-inclusive and class-conscious industrial union, or something closer to the community unionism of the Knights of Labor, or taking the more familiar path of the exclusive craft unions of the American Federation of Labor. Immigrant mine workers forced the hand of the UMWA and the union became a leading industry-wide and inclusive union. The 1897 anthracite strike movement helped push the UMWA in that direction.

Labor has not been the only interested body. Shackel shows how the strike and the massacre have impacted the region’s Catholicism, the local press, certain white ethnic organizations, and key local individuals. Conflicts have arisen which raise questions concerning who “owns” history and the past lived experiences of immigrant workers and how the answers to these questions impact people today. The question of whether or not historical commemorations can ease pain and build bridges between people is not abstract in Luzerne County. Shackel makes a strong contribution to the region’s labor and social history when he demonstrates how competing narratives of the massacre have remained with us and helped shape race, ethnic, and class consciousness in Luzerne County.

Good labor history encourages us to ask “What if…” Shackel’s book reminds us that the Slavic, Hungarian, Polish, and Lithuanian mine workers making their homes in the anthracite region in the 1890s might have entered mining and become citizens under different conditions. The industrialists might have paid more attention to mining technology and worker safety and health. The anthracite industry might have emerged from the Civil War and Reconstruction years under different terms than it did. The democratic spirit which was evident in Hazleton the late nineteenth century might have forced concessions from the mine owners. The local law enforcement who were used against the immigrant workers on September 10, 1897 might have behaved differently. The failures of the 1890s have remained with us, and the author does an excellent job of showing the connections between those grim days and our own. New immigrant labor in the region appears to be facing racist opposition similar in many respects to what the immigrants of the 1890s faced.

This is a short and easy-to-read book which has been well-researched. It is not a popular history of the Hazleton-Lattimer area. The book does not repeat the familiar anthracite mining narratives. The book may be used as a tool for social change if its two concluding chapters on the region’s economy and future prospects are taken seriously by people at the grassroots. The book may also serve as a guide for people outside of the region who are seeking to build bridges between working-class immigrants and labor, social, and community movements.

In such a short volume certain details and facts get sacrificed for readability. Part of the author’s account details some conflicts which have arisen between unions and churches in the Hazleton area. Shackel’s attention to the influence of Catholicism on the region’s class-consciousness is helpful. What is missing is an analysis of the long-standing conflicts between white ethnic groups in the area and details on how this affected both the region’s Catholicism and the UMWA. Also missing are accounts of unionism in the region after the turn of the last century and institutions such as the short-lived Luzerne County Labor Party. Among the “What ifs…” that puzzle us today are the related questions of why the Left has not done well in the Hazleton area over the past century and why the region’s UMWA adopted the structure and relatively conservative stance that it did. The region lost an opportunity to progress in the mid- and late-1960s and early 1970s, and instead took a tragic back step. Shackel’s account touches on this period but does not explore it.

Shackel is at his best when he writes about the massacre and what immediately followed, as well as when he explores the conditions in Luzerne County today. I think that his implied criticisms of the area’s labor movement have less substance, and I take issue with his faith in non-governmental organizations and certain middle-class expatriates who are showing an interest in the region. A minor criticism is that he downplays the long-standing influence of organized crime in Hazleton. I wondered as I read the book if it can be argued that there is a connection between the Lattimer massacre and the violence in Kelayres, near Tamaqua, in 1934.

The comparisons Shackel makes between 1897 and 2018 should help energize us to make needed political changes. An important difference in the times also stands out. Shackel shows how immigrant workers self-organized into unions, set about building a new union movement, and struck en masse in 1897. We are left to wonder if the new immigrants to the region will likewise identify with unionism or not. If such a rebuilding of today’s labor movement does not take place, what path will be taken?

Bob Rossi is a retired union organizer whose family lived in Hazleton, Fern Glen, and Philadelphia. He is active in community and socialist organizing efforts in Salem, Oregon and is writing a social history of Colorado coal mining communities in the 1920s. He is a member of Hazleton’s Tirolesi Alpini club and Hazleton’s Greek Catholic Union lodge.

Here you can listen to Bob talking about Remembering Lattimer as well as Silk Stockings and Socialism: Philadelphia’s Radical Hosiery Workers from the Jazz Age to the New Deal (by Sharon McConnell-Sidorick) on Community Radio, KUMZ.org (Salem & Keizer, OR). 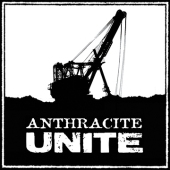 ← The Quiet, Brave Battle
The Ashes of the Dying →