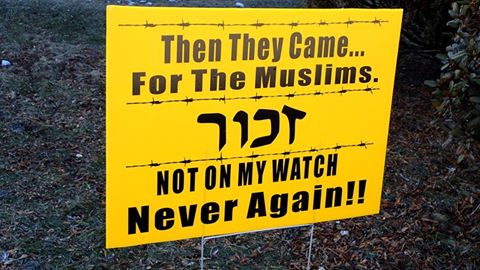 by Bob Klemow and Laurie Tevlin-Klemow

Our president recently made us very ill. He drafted an executive order that included a ban on immigrants from certain countries, like Syria – where U.S. weapons massacred nearly 200,000 civilians – and Iraq – where we killed hundreds of thousands. It is one thing to go against the leaders of these countries, but quite another to ban the women and children persecuted, widowed, and orphaned by despots.

Research by Alex Nowrasteh at the libertarian Cato Institute makes the ban even more troubling: Nationals of the seven countries singled out by the executive action have killed zero people in terrorist attacks on U.S. soil between 1975 and 2015.

For us, the ban immediately evoked memories of the quota system that kept the St. Louis out of America and sent hundreds to their death at the hands of Adolf Hitler and his Nazi regime. Though thankfully Bob’s Jewish grandparents made it to America before fear prompted quotas for immigrants from Eastern and Southern Europe, three of his great-grandparents did not make it. They were murdered and buried in mass graves, only because they practiced a religion that others deemed unacceptable.

We decided to make the sign to express our horror at what was happening. The idea came from an incident that occurred in Billings, Montana in the 1970’s. Laurie was living in North Dakota, near the Montana border at the time. At Chanukah, a Jewish family in Billings displayed a Menorah in their window. A skinhead threw a rock through the glass. In response, several thousand families put pictures of Menorahs in their windows. They felt they had to stand together.

We feel the same way today.

The sign is not aimed at President Trump. We may oppose him, but that is not our message. We are simply calling on folks to treat people with basic human dignity – for menschen, as Bob’s grandfather used to say. Keeping widows and orphans from sanctuary, keeping doctors from joining the staffs at our hospitals, separating families: There is nothing American, nor humane, about this.

We borrowed the first line from a picture in the New York Times showing a protestor holding a sign at Kennedy International Airport. “Then they came for the Muslims,” the sign read, paraphrasing Reverend Martin Niemöller’s WWII poem.

We added an icon from a Holocaust memorial pin, included the barbed wire to represent concentration camps, and the word, “Zachor,” meaning remember. We also added “Never Again,” the watchwords of Holocaust remembrance. We chose yellow for the armbands that the Nazis forced Jews to wear. Now that it has snowed, the bright color stands out on our lawn.

This entire ban is a case of attacking a straw man to play on people’s fears to win power. Don’t fall for it. Be a human being first. During our War for Independence, Edmund Burke, our adversary, a member of the British Parliament, wrote…

The only thing necessary for the triumph of evil is for good men to do nothing. Nobody made a greater mistake than he who did nothing because he could do only a little.

If you are a mensch, please join us. Stand up to evil.