On Thursday May 11, dozens of local residents gathered in front of Congressman Lou Barletta’s (D-11) Hazleton office in protest of his vote in favor of the American Health Care Act. According to the event’s press release, the purpose was to “hold Congressman Lou Barletta accountable to his morally bankrupt vote to kick 24 million people off their health insurance, increase health insurance costs, slap an age tax on those above 50, and destroy protections for people with pre-existing conditions.”

The event was organized by a number of groups in Pennsylvania’s 11th Congressional District, including: 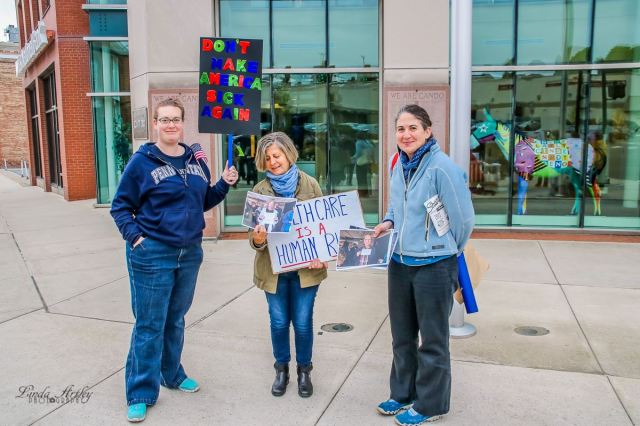 At the onset of the event, organizer Dwayne Heisler visited Barletta’s office to ask for a town hall meeting. The ensuing video of Barletta staffers giving him the runaround was viewed 34 thousand times and counting.

A die-in staged at the busiest intersection in Hazleton was a highlight of the event.

The Standard-Speaker covered the protest, featuring an image on the front page. You can read their article, titled, “Protesters Jeer Barletta, Who Stands By AHCA Vote” here. 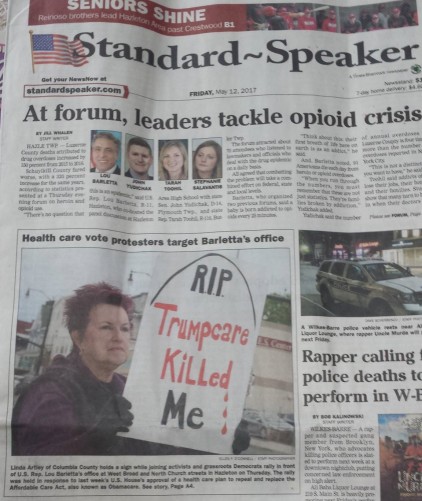 Similar events are planned, as local resistance continues to grow. To get involved, contact one or more of the groups listed above.

Photos (with the exception of the Standard-Speaker cover) are courtesy of Linda Artley.