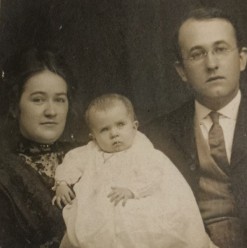 My maternal grandmother Anne was lace-curtain Irish, which was about as close to “gentry” as any small coal region town in the early 1900s could get.

She loved her family home and would not move even when the neighborhood went from middle to working class. My grandfather was a successful businessperson, in a major public utility and my grandmother had inherited money, so they were fairly “well off” by the standards of the day.

A “self-made man,” my grandfather (his father was a miner) was actually more “socially conscious” than my grandmother who, since she was raised with money, took it more for granted. He was mortified one day to come home early to find my grandmother wearing a kerchief on her head scrubbing the stoop of the house. (They had hired help and my grandmother did not do housework per se). When he questioned her about her rather strange new “hobby,” she informed him that this was how the newly arrived neighbors socialized. They didn’t have socials or “call on” each other. They socialized as they scrubbed their porches and swept their pavements. “If this is the way to make friends with our new neighbors, then this is how I’ll do it,” she explained to my grandfather (still mortified, by the way!), as she greeted passersby saying “hello” in languages my grandfather never heard!

The real proof of my grandmother’s character (and power!) happened one day when a little Jewish boy in the neighborhood came to her crying that people were taunting him, calling his people “Christ-killers.” She gently and kindly explained to him that this was simply not true, but then shrewdly asked, “Where did you hear these stories?”

As it turned out, a “new” family had moved into town who were virulently anti-Semitic. My grandmother made a “call” and informed them that if they persisted in these stories, she would make it impossible for them to stay in town.

Obviously, they laughed her off. She was a petite (5’2”) quiet understated person (as I think most real people of quality are!), so what could she do? – She showed them!

According to my mother (Anne’s oldest daughter), my grandmother told the maid to “get her into her corsets” (this was the early 1900s – no woman went out socially without being “strapped” into one of those torture devices!).

My mother said she knew her mother was preparing for “war” when in addition to the corsets, she said to her: “Kitty, get my pearls!” Now, according to my mother, whenever her mother got strapped into her corsets and donned her pearls (a wedding gift from my grandfather), it was akin to a Medieval knight donning his armor and taking up his sword and shield, girded for battle!

My grandmother “made the rounds” of social calls on all her friends and my grandfather’s business associates, who were also her friends and knew her family. She informed them all that if they patronized the store this very anti-Semitic couple owned, she could no longer “call on” or “receive them” in her home. Within a year, that family was gone from the town!

Was my grandmother solely responsible for these people leaving town? Perhaps not. Did she play a role in their leaving? Definitely!

My mother told me this was the first time she even realized what real “power” this quiet, demure, Victorian lady had. When she questioned my grandmother about it, she replied, “This is what it means to have ‘status’ and ‘influence.’ Never abuse it, but if there comes a time to use it for a good cause, do it.  We must all fight against hatred.”

This was not the last battle my grandmother fought against social bigotry and anti-Semitism, but my mother remembered it as being the most memorable. When my grandmother Anne died in the 1930s, Kaddish was said for her in temple. She was the only gentile (i.e., non-Jewish) woman who had ever been prayed for publicly in the town’s synagogue. I have always been so proud of that. To me, she was a true example of what a person of quality and integrity should be.

Several years ago, I had my grandmother’s pearls (yes, those pearls!) reset and gave them to my daughter. I told her to wear them proudly not just as a family heirloom, but in memory of a truly great lady who showed real class and strength when faced with bigotry.