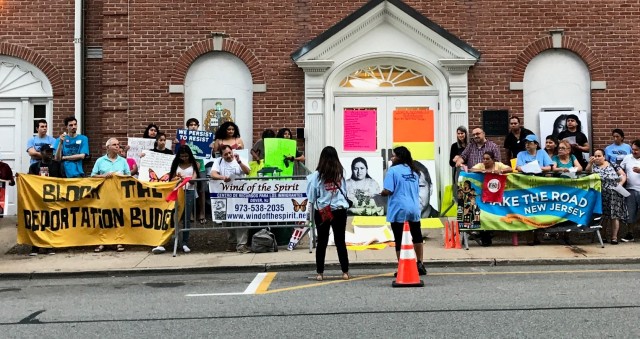 To start off, can you tell us your story?

I came to the U.S. when I was eight. I was brought here by my parents. I grew up in the Allentown area and still live there. I’m 26 now. I had what you might call a “normal” childhood, aside from the constant fear and anxiety that you live with as an undocumented person – being scared that something might happen to you or that something might happen to your family. But I’ve spent most of my life here, I’ve spent much more time here in the U.S. and here in Pennsylvania than I spent back in Mexico.

Why did your folks decide to come to the U.S.?

My story is just like everyone else’s story: It was the economy. There was not enough money. There were not enough job opportunities. For them, it was out of desperation for wanting to provide better for their kids – at that time, it was my younger sister and me. I’m sure everyone has heard it before… they just wanted a better life.

Right after the news broke that President Trump was going to eliminate DACA, you spoke at a rally and said something powerful. You said, “We’re not Dreamers, we’re wide awake!” Can you explain what you meant by that?

Five years ago when DACA was announced, a lot of us settled for that. It was little crumbs they gave us, we received them, and we were thankful for them because we thought it was better than nothing. The only thing DACA provided for me and many others is the ability to legally work. I think we have to demand what we deserve. It doesn’t necessarily need to be amnesty for 11 million people, but it certainly is not going to be something that comes with strings attached, like more border patrol or more detention centers. I’m wide awake to the realities that the issue is not so black and white, it’s very, very complex. We have to fight for everyone to have dignity and respect and not have to live with fear and anxiety every day.

The argument many people are making in support of DACA is that we should keep it because of deservingness. They say these are 800,000 people who have lived in the U.S. for so long, because many recipients are in the military, because a large percentage have jobs and only a small percentage have committed crime… the list goes on. Not to say DACA recipients are undeserving, but is there a concern that this kind of talk can leave others behind – for example, the other ten million people who are undocumented and living their lives in fear?

Yes, of course. I’ve been vocal about this. I’m awake to the realities of the rest of our community, of the other ten million people. Because DACA did leave a lot of people behind. I think it is important for DACA recipients who have that privilege to speak out to say it is not fair, because we all deserve to be treated like humans. At the end of the day, we all deserve to have basic human rights.

It should not matter if you are an A+ student, or have a 4.0 GPA. Because at the end of the day, there are a lot of people like me – you know, I’m just a regular 26-year-old, an average student, not a fantastic student. That doesn’t mean I deserve to be treated with dignity any less than other folks who are doing great in school and becoming lawyers or doctors. We all deserve human rights. We have folks who work hard in warehouses; they deserve human rights too. We have folks who work hard in the fields, picking the fruit; they deserve human rights too. DACA recipients deserve to be here because it is the right thing to do, not because we are all amazing.

Back to the economic situation: As a recent post on our blog pointed out, the irony is that there are now folks like yourself who came to the U.S. for economic reasons living alongside folks in places like Pennsylvania’s Anthracite Coal Region who have lived here for generations and who are struggling economically for many of the exact same reasons.

What we do not hear nearly enough about is this backstory where global capitalism has gotten so competitive and corporations have done so much to cut costs that it has left working class people across the globe in dire situations.

In response to this, we could be pushing back by building international working class solidarity. But instead, so many people have engaged in scapegoating. Working class white folks in places like Hazleton, for example, are being encouraged to blame immigrants for their problems – which both makes life more difficult for targeted immigrants and distracts us all from the root of the problem. What are your thoughts on this, especially as it relates to Northeastern Pennsylvania?

These misconceptions have always been there. There are a lot of misconceptions not only about DACA but about undocumented folks. One of them is that we don’t pay taxes, that we are living off the government. We actually do pay taxes. And when the government takes our money, it gives us nothing back in return. We don’t qualify for welfare or any other government programs. We don’t get a “free ride” on anything. Even with school, we get charged more because we are not eligible for most forms of financial aid. The reality is the government is not working to help low-income families and they use immigrants as scapegoats because it is easier to do that than to face the issue and do something about it.

Let’s talk about deportation. Ending DACA meant ending the protection from deportation that the U.S. government promised 800,000 young people. No matter how hard people unaffected by it try, they can probably never fully grasp what it must be like, how scary it must be, especially for those at risk of the government deporting them to a country they barely know at all. What can you say about deportation?

People simplify it and say, “Well, that’s your country.” But it’s not that easy! I’ve spent most of my life in the U.S. As much of this country tries to let us know every day that they don’t want us here, this is still our home. We still consider this our home. We’ve made our lives here.

Can you tell us a bit more about Make the Road?

We’re a non-profit organization, we have offices in New York, New Jersey, Reading, Allentown, and Connecticut. What we do is we build power in Latino and working class communities; we focus on achieving dignity and justice by organizing, by bringing the community together, by policy innovation, transformative education, and by survival services like “know your rights” workshops. We are growing: We have a couple of locations about to open up – one in Scranton and we’re also going to open up one in Nevada.

How did you get involved with Make the Road?

Well I’ve been involved in activism since before DACA was even announced. I think growing up being undocumented, having an undocumented family and community, I was always drawn to something that was going to help make change, and so I was involved on and off for a few years. With Make the Road, I started getting involved earlier this year. Actually, it was thanks to my parents. They told me about Make the Road – about a meeting they were having – and I was a little hesitant at first. But, my mom being my mom, she was like: I’m not asking you, I’m telling you to get involved. So I came to a meeting and I liked what they were saying, what I was hearing. And so I started to get involved. I started coming to the meetings more, volunteering my time to community outreach or phone banking or whatever they needed. That was the beginning of this year, and now I’m working with them full time.

What is your hope for Scranton? What does your organization you hope to achieve there?

I hope we can provide a space where people in the community can feel safe, where they can feel like they have someone to help them, to protect them, to have their back. Many people, for example, have had experiences with racism and felt they really had no one to turn to or no one to talk to. We want them to have a place where they can come and know that they are not alone in these experiences. And to learn how we can fight back, to learn that their voice does matter. They do have a voice.

A lot of times people feel like there is no sense in getting involved because what difference is that going to make? It actually does make a lot of difference. We want to empower the community in Scranton. You have a voice, it is important, and this is how we can use it.

What happens now? What are the next steps for Make the Road and in this bigger struggle, not just for DACA, but also for immigrant rights, for human rights?

I think people need to continue making their voices heard. People can call their representatives and let them know you support DACA or that you support immigrant rights. If there are local events to support DACA or the immigrant community, come out and show your support. Something you can do yourself, even at home, is when you hear someone making a racist comment, call them out on it. We need to start with our families and friends and within our own circles. If you ever see something going on and you say “I wish there was someone who would do something” or “I wish there was someone who would step up,” realize that you are someone and you could do something.

I would also encourage people to check out Make the Road. We have a Facebook page where people can follow the actions and events that we have going on. We also need resources to do the work we do. For example, we went to Washington on September 26th to be seen, to be heard, to let them know, with regard to DACA, that we aren’t going to be used as bargaining chips. For those who cannot come along with us on events like that, they can always make a donation to support us. Because at the end of the day, this work is only possible with the support of people who share the common goal of bettering their communities, of making them free from poverty, racism, homophobia and xenophobia.