Gonna Sit at the Welcome Table

Anthracite Unite launched a petition in August calling on Congressman Lou Barletta to resign from the National Board of Advisors of the Federation for American Immigration Reform (FAIR).

More than 1,000 people have signed the petition so far.

On Friday November 17, activists and concerned citizens from across Pennsylvania gathered at each of Barletta’s four Pennsylvania offices – Carlisle, Harrisburg, Hazleton, and Sunbury – to simultaneously hand-deliver the signatures. 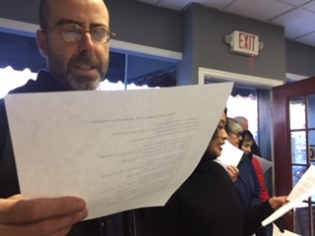 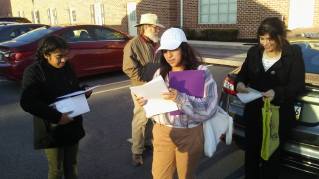 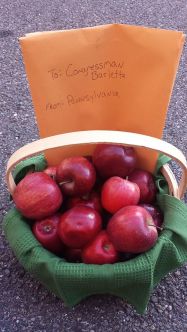 The petition documents were placed inside a basket of apples, which were picked with the hands of exploited undocumented immigrant laborers. The apples in this way served as a reminder that large-scale farming operations in this country, dating back to slavery, have always relied upon low wage labor. It is not that immigrants “take jobs” or even that they “do the jobs that others won’t”; the emphasis here is that racialized exploitation is at the core of our economic system.

During the petition drop off, participants sang a modified version of “Welcome Table,” an old spiritual tune popularized during the lunch counter sit-ins of the Civil Rights Movement. The underlying message of the song remains relevant today, powerfully connecting past and present struggles for civil rights in the United States.

The act of singing together is indeed a powerful unifier. Unity, after all, was the essential message of this action. Not only unity against hate, but also unity in the form of a promise that we will look out for one another and stand together despite efforts to keep us divided (see statement below).

Non-immigrants thus stood alongside immigrants last week not because they are “hard workers” but simply because they are human beings who deserve basic rights. The action also challenged the premise that immigrants need non-immigrants to “help” them (see also “We’re Not Dreamers, We’re Wide Awake“). Action organizers emphasized that migrants have a long history of organizing themselves and demanding what they deserve.

The aim of the action was instead to show that when we stand together united based on our shared interests as members of the working class, we become an especially powerful force.

For at the end of the day, it is the divisiveness of Lou Barletta’s politics that best serve his own political ambitions and the interests of the powerful. Attacks on immigrants, beyond being harmful in their own right, distract us from the real problems facing our communities – lack of access to basic human rights like health care, housing, education, food, and transportation, and the like. The platform of a group like FAIR encourages us to blame immigrants and other targeted communities rather than to come together and attack the root of these problems.

The petition campaign will continue until Congressman Barletta resigns from FAIR’s National Board of Advisors. If you haven’t signed the petition yet, you may do so now and encourage your friends and family to do the same.

This is the full statement participants delivered to the Congressman:

We stand here united today not to protest, but to plead. We ask that you resign from FAIR’s National Board of Advisors and begin working to eliminate rather than perpetuate hate in our communities.

FAIR is a Southern Poverty Law Center-designated hate group. You have denied the significance of this in the past, but the organization’s history speaks for itself.

More than 1,000 people have signed the petition we deliver to you today, over 90% of
whom are Pennsylvanians.

We’re also delivering more than 200 comments from people who signed. Read them and you’ll notice that people from across the state are asking that you embrace
love over hate, unity over division.

Especially as a public figure, your words and actions have consequences. Anti-immigrant rhetoric stirs hatred and breeds fear. These politics cause real human
suffering.

And they keep us distracted from issues that really matter to working class people
like us. We need a leader who will focus on things like access to good healthcare and decent wages, not someone who creates scapegoats and deflects blame.

To give you a taste of the lived experience of the people you have demonized, we
brought you a basket of apples that were picked with the hands of undocumented
immigrant farm workers. They represent but one of the many luxuries you and so
many of us enjoy as a result of the exploitation of their labor.

When you give thanks with your family next week, Congressman, we urge you to reflect on the morality of your affiliations. And we challenge you to run a Senate campaign that is free of demagoguery. Distancing yourself from FAIR is a necessary first step in that process.

These are the lyrics to the song participants sang during the petition deliveries: