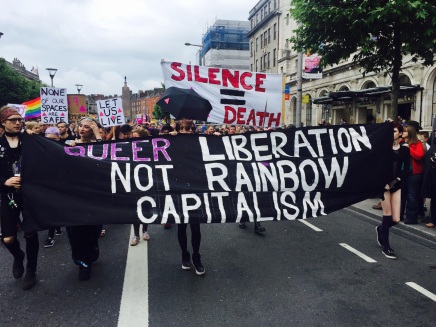 by Ky McGinniss and Em Maloney

It’s Pride month, y’all. During this observance, we can take some extra time to celebrate being Queer. We can also reflect upon the achievements of the Lesbian, Gay, Bisexual, Transgender, and Queer (LGBTQ+) pioneers of yesterday and today. The main purpose for Pride Month however is to remember the riot at the Stonewall Inn in New York City on June 28th, 1969, which effectively kicked off the modern queer rights movement.

It is said that things all went to hell, when police raided the gay bar Stonewall early in the morning and started brutalizing some of the patrons. This was a common occurrence at gay inclusive bars of the time. Out of indignation, bar patrons started throwing whatever they could find at the police. Soon after neighborhood residents joined in, which escalated tensions dramatically and kicked off a six day long protest. Among those leading the charge were Sylvia Rivera and Marsha P. Johnson.

Sylvia Rivera (1951-2002) was a Latinx transgender rights pioneer dedicated to justice and human rights. She likely threw one of the first bottles that started the Stonewall Riots. Throughout her life, Rivera served young trans and queer people of color stricken with poverty, homelessness, abuse, and discrimination. Despite her hard work, she often found herself excluded from the more “mainstream” gay rights movement. This was largely because many mainstream gay folk (who were mostly upper class white, cisgender, gay men) opposed intersectionality. The case of the Black Pride 4 shows that this remains a prevalent issue even today. Sylvia Rivera, Marsha P. Johnson, and others went on to work together throughout the 1970s to start what is now known as Street Transgender Action Revolutionaries, or the “S.T.A.R. House,” which helps homeless transgender youth in New York City.

Up until her murder (initially ruled a suicide by police) in 1992, African-American Trans rights leader Marsha P. Johnson shared Rivera’s fiery spirit for equality. Marsha was born in New Jersey in 1945. She found joy in costume design and creating her own clothes from materials she found in thrift shops. Her creativity led to her becoming a model for pop artist Andy Warhol. Johnson dealt with severe mental health issues, surviving sexual assault, police brutalization, and harassment on nearly a daily basis. Despite this, she managed to find happiness everywhere she went. It’s amazing and inspirational for someone to live such a difficult life and still find the silver lining in all of it. Johnson later earned the title the “Drag Mother” for her consistent service and support of LGBTQ+ youth facing hardships or homelessness.

Despite the progress made since the time of Stonewall, there still is an intense lack of federal and statewide protection for LGBTQ+ folks. Without these protections, queer folk continue to suffer from homelessness, poverty, and suicide. Unlike the larger metropolitan areas, such as New York City and Philadelphia, there are no LGBTQ+ specific homeless shelters or resources in Northeastern Pennsylvania. Some of the closest options available are the NEPA Youth Shelter (which is LGBTQ+ welcoming) and Ruth’s Place – Shelter for Homeless Women (which serves both Cis & Trans women). In Pennsylvania, 46 cities (including five in NEPA) have passed anti-discrimination ordinances to protect LGBTQ+ people.

Scranton was the first to pass such legislation back in 2003. Over a decade later, Pittston passed an ordinance in 2013. Dickson City followed suit by unanimously voting to extend civil rights protections based on sexual orientation and gender identity for employment, housing and public accommodations in June of 2016. Then came the city of Wilkes-Barre, which passed an ordinance in September 2016. Stroudsburg later narrowly succeeded in voting for protections in April of 2017.

These small victories are necessary steps towards greater change, but statewide and nationwide legislation are what is sorely needed. Bills like HB861 and the Masterpiece Cakeshop v. Colorado Civil Rights Commission case have been used to rally an emboldened religiously conservative base, which has been ramping up their attacks on the LGBTQ+ community in the name of religious freedom. HB861 was first introduced to the Pennsylvania State House last year. It threatens to demolish the anti-discrimination protections for LGBTQ+ people and in turn jeopardizes the livelihood of a vast amount of out queer citizens. In sum, House Bill 861 reads that any ordinance, rule, or policy enacted by a municipality on or after January 1, 2015, is void and may not regulate or enforce employer policies or practices. Thankfully, Pennsylvania Governor Tom Wolf supports passing such legislation to protect LGBT+ Pennsylvanians. But the challenge of getting a bill like this through the PA State House and Senate remains. In office since 1999, PA State Rep. Daryl Metcalfe has time and again stood in the way of LGBTQ+ inclusive legislation, because he is totally hetrosexual and wants men to stop touching him. Basking in the swampy waters of bigotry, Metcalfe has also defended white nationalism, which he claims is different from white supremacy.

Around the same time as Wilkes-Barre’s success in 2016, Luzerne County Council failed to pass similar measures. Only two council members expressed support at the time; five others voted against it and two abstained. Among the detractors was Luzerne County Councilman Harry Haas, who is still in office today. According to him, such an anti-discrimination ordinance will lead to greater division. Haas humbugs: “I’m here to protect all of you – anybody — heterosexual, homosexual, multi-sexual — I don’t even know what the terms are anymore because it’s getting out of control,” he told the Times Leader. He went on to problematically claim that passing laws to make people feel good about their lifestyle are incompatible with the religious views of others. Do we have to point out that separation of church and state is a thing and that we are a Democratic Republic – not a Theocracy? Or are we the only ones who paid attention to this little tidbit in 5th grade social studies? You’d think Haas would know this, being he teaches history to middle schoolers.

Haas’s comments serve to illustrate the intense religious pressure that is put on local politicians. It is no secret that NEPA is a conservative area, and that its religious culture plays into that. Clarks Summit, after all, is home to one of the last “ministry-focused” Evangelical Universities. Local Catholics were angered last year when a seemingly pro-LGBTQ+ speaker, Father James Martin, came to speak as Misericordia University. The college and Diocese defended Fr. Martin by saying that he didn’t actually push for any change in church doctrine on the issue of LGBTQ+ inclusion in the church. Even so, both of these organizations have a significant history of punishing and oppressing people who are simply trying to live authentically.

There is also the curious case of Laureen Cummings. Some may look to her social media history and comments as being anti-Black and anti-Trans, but according to her this is not the case. From her viewpoint, she is a good ol’ slice of American pie upholding the values of traditional red, white, and blue America. This is why the self-proclaimed patriot founded the Scranton Tea Party. She claims that she is simply looking to better the community, as well as protect children from abuse. Cool story, but she seems to selectively pass over the fact that queer youth do in fact exist and often struggle with this very matter when they encounter homophobic adults and peers. Cummings also has made severely transphobic remarks, which have been largely ignored by the community at large. This is part of the reason why there is so little focus on trans/non-binary rights or support in NEPA. While we do have the NEPA Trans Health Conference, many Trans* people still find themselves driving hours to receive the medical and mental health help they need as they transition. This is not a sustainable system, and is one that could be addressed if we hold not just these bigoted politicians accountable, but all of our institutions.

We must also look at the LGBTQ+ community from within. Sometimes, after victories like the federal right to marry, a sense of complacency can set in. While decisions like this benefit many LGBTQ+ folks — especially gay white upper class men — it becomes easy to forget that other queer people are still suffering.

Sadly, this seems to be the case for NEPA, even within the LGBTQ+ community. Some here believe it best to not rock the boat, because there is “already enough division.” There is also a pressure to fit into the binaries of gender or sexuality because fluidity or larger attractions make people uncomfortable. The Haas comment referenced before, the one where he disparages “multisexuality,” is an obvious sleight against bisexuality, pansexuality, and anything within that spectrum. This is a common occurrence for bi+ people, and one that needs to be addressed both outside the community and within it.

Tackling all of these obstacles may seem like a daunting task, but it can be done. Others cities, US states, and whole countries have made it happen. It starts when we speak up, take action, and work together to demand change. Living up to the task is Make the Road PA’s LGBTQ+ committee, Amor Y Rabia. Based out of Allentown, Make the Road PA fights tirelessly to build a stronger working class. They are also very passionate in speaking out for the rights of immigrants and Latinx communities.

Here in the Scranton / Wilkes-Barre area, #queerNEPA recently announced its formation on Pulse Remembrance Day, June 12th. This new organization’s mission is to advocate for LGBTQ+ equality and justice in Northeastern Pennsylvania. #queerNEPA also stands for reproductive justice and the rights of the marginalized, homeless, and impoverished. Their first meeting will be on Sunday, July 8th at 5 pm at Casey’s (1259 Bryn Mawr Street, Scranton), a new gay bar in the Electric City. Allies and queer folk alike are welcome.

At the end of the day, at the end of the month, Pride is about the force of queer people coming together to push for change. Historically, they have not seen that change occur in their lifetimes. This year is dedicated to Marsha P. Johnson and Sylvia Rivera. It’s dedicated to those who lost their lives during the AIDS crisis. It’s dedicated to those who were murdered at Pulse in Orlando. It’s dedicated to those whose names we will never know, but who have laid their lives down all the same. This Pride is also dedicated to all of you who are queer and reading this. Know that there is a fight for change in NEPA. We welcome you to join that fight. But remember that even if we do not live to see the change we want, the change that is desperately needed, that will not rob us of our joy and our happiness in the communities we have and can build, in our relationships, and in our selves. Happy Pride, y’all.

Ky McGinniss is a genderqueer activist working out of Dunmore and Scranton. A contemplative Christian, they envision a world where the whole queer community can be free. They enjoy working through these difficult conversations while playing weird music and reading far too many books.

Em Maloney (maloneyofnepa.com) is a queer Muslim activist based out of the Wyoming Valley. She has a passion for advocating nonviolence, sex positivity, and social justice. She also fangirls over Janelle Monae’s music and fashion.