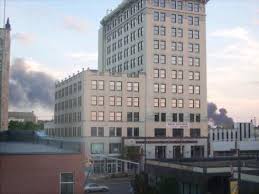 While Pennsylvania’s Anthracite Coal Region may not be known for its impressive skylines, there are still plenty of tall buildings, usually named after men of enormous wealth, that cast shadows onto our streets.

On one hand, these are strikingly visible structures. They were built to be seen.

On the other hand, they are remarkably invisible. Walking by on a daily basis, we see mere buildings. Rarely do we pause to consider their significance.

Even if we fail to notice it, their symbolism is therefore very real. These buildings signal with a gentle force who we are, where we’ve been, and what we value.

What, then, does it mean when the legacies of tyrants and tycoons becomes representative of who we are, as a community?

The adage is that when you tell someone’s story for them, you are better able to control them. As the comedian / actor Russell Brand put it, “If you don’t choose heroes, heroes will be chosen for you. And they will not represent values that empower you, they will represent powers that will enslave you.”

This is why it is so important for us to familiarize ourselves with what Howard Zinn calls ‘people’s history.’ The past offers us so much, including icons we can look up to–people who fought for the rights and privileges we enjoy today; people who persevered through struggles just like our own; and people who empower us. (As a prime example of this, see the recent Anthracite Unite post about “Big Mary.”)

The Markle Banking & Trust Company Building is the tallest in Hazleton. Alvan Markle made his intentions clear when overseeing the design and construction of this eleven-story tower on Broad Street in 1910: He wanted it to “dominate the streetscape.”

Local lore identifies the Markle men as Anthracite Region pioneers. Like other coal barons, they reap praise for fueling the industrial revolution, for their inventions, for their numerous board appointments, and, of course, for their riches.

The narrative subtly implies that we working class people owe our very existence to these aristocrats.

But in truth, the Markle family made it a habit of making life miserable for the coal miners they employed.

In other words, what we usually get is a view from the top, a proverbial glance out the penthouse window of the industrialist’s tower.

George Markle arrived in Pennsylvania in 1849, the first of his family. He worked as a carpenter and a leather worker before establishing his own ventures and amassing a fortune. He is known as the “father of the breaker” for his design of this mammoth structures used to sort coal.

Although such ingenuity often receives blind praise, let’s not forget the reality of what it was like to work on a coal breaker. As Michael Novak (1974: pg. 39) writes in The Guns of Lattimer…

Breaker boys sat astride the chutes, plucking out the slate and sorting out lumps of coal by size. The clanging noise inside as the chains and belts pushed the coal along was earsplitting. The entire building rattled and shook when the belts were in operation. Fine black dust covered all ledges, walls, and machinery. Several were known to have disappeared, to be found hours later mangled and crushed while caught bent around one of the turning wheels. Windows were broken, icy air swept in during the winter, and in the stifling summers the fine dust on their bodies was caked with sweat.

George’s rise to prominence seems to have instilled in him an arrogant, anti-worker mindset—a trait he and his sons shared with other elite local families, like the Pardees and the Van Wickles.

As Donald Miller and Richard Sharpless write in The Kingdom of Coal, this group of coal barons…

…were secure in the world they had made and were convinced of the superiority of their ways. This caused them to develop a certain attitude, in practice more autocratic than paternalistic, toward people under their influence or control.

The Markles despised unions. As Novak (pg. 42) writes, “They admired [immigrant] workers’ physical industry, but loathed their tendencies toward solidarity.”

They did whatever they needed to do to keep mine workers from organizing, including refusing to recognize labor unions as legitimate. In 1877, for example, George was reportedly in on efforts to hire the Pinkertons to take down the Molly Maguires.

George’s son John was probably the most ruthlessly anti-worker of them all. At one point, he stated his belief “that their power and wealth made them ‘trustees’ for their fellow men, with responsibility ‘for the proper use of them.’”

John’s behavior during the Great Strike of 1902 provides another example of the hostility any miner who crossed the Markle family was bound to face. Miller and Sharpless describe how, “In the immediate aftermath of this strike, John Markle summarily evicted thirteen of his employees by canceling the fifteen-and-one-half-cent day-to-day leases on their company houses.” 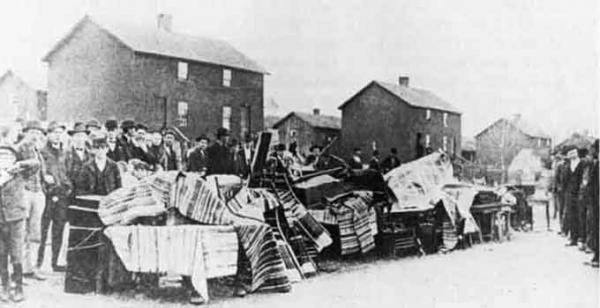 One evicted employee had worked over three decades for the Markles. John reportedly left him on the street in an act of retaliation “because his son, also a miner, had worked on a relief committee that distributed food to the families of needy workers.”

John evicted another worker from a four-room house along with his seven children, his wife, and his wife’s mother and father, who were elderly and bedridden. Although the local sheriff was willing to grant the family more time in the house given their situation, Markle was not. He ordered them out in five minutes and had their belongings piled in the street.

In testifying to the Anthracite Coal Strike Commission, the famed attorney, Clarence Darrow, summarized John Markle’s exploits as such:

Gentlemen of the commission, you may roll together all the cruelty and all the violence and all the misery that all of these irresponsible Goths and vandals have committed in the anthracite region; you may pack them in one, and they cannot equal the fiendish cruelty of John Markle when the cause was gone, and he turned these helpless people into the street simply to satisfy his hellish hate.

Even into the present, the Markle legacy is questionable when viewed from the perspective of the working class people of the Anthracite Region.

In 1927, John, along with his wife, Mary, went on to create the John and Mary R. Markle Foundation. Located in New York City, the foundation describes its mission as working “to promote the advancement and diffusion of knowledge among people of the United States, and to promote the general good of mankind.”

Puzzlingly, the foundation does not appear to have made any effort to give back to the region that the Markles stripped of its riches. In fact, the Foundation’s website does not appear to mention Anthracite Coal Region even once. John’s biography on the website only refers to him generically as an “inventor, industrialist, and financier.”

There are a few exceptions to this. The Markle family contributed to the Hazleton Area Public Library and the estate that is now Penn State Hazleton. But this is just a drop in the bucket compared to the vast amounts of wealth they pulled out of the community.

The Markle family is not alone, and the Markle Building is not unique. Similar markers dot the coal region landscape. Many of our cities and towns in fact bear the names of elites with histories that likewise deserve scrutiny—Gowen City, Pardeesville, and Girardsville, to name a few.

To be sure, my point is not that we should simply tarnish these otherwise shiny legacies. As Howard Zinn writes, the larger objective of understanding history from the bottom up is to avoid becoming “passive acceptors of official doctrine.”

With or without the Markles, coal baron politics continue to plague our region.

In the shadow of the Markle building today, elites scapegoat immigrant workers from Latin America, rather than Europe. Meatpacking has replaced mining in Hazleton, but the pay is still low and the conditions dangerous. In perhaps the best modern example of coal baron politics, the region recently threw its weight behind a billionaire presidential candidate with a Markle-esque record of unfairly compensating his workers, preventing them from unionizing, and complaining that working people are overpaid.

As a person with Coal Region roots, I refuse to kneel at the altar of these merciless, profit-hungry men. More importantly, I refuse to remain subjected to a system that not only exploits us, but also uses its wealth to develop propaganda designed to convince us that our subordination is for our own good.

As James Loewen writes in his book about historical memory, Lies Across America, it is time for us to “take back the landscape.” Rather than sitting back idly and allowing our story to be told for us, we must take an active role, challenging the histories of the powerful and memorializing our working class heroes. If it is true that history is told by the victors, then let us do whatever it takes to win.

Jamie Longazel is the author of Undocumented Fears: Immigration and the Politics of Divide and Conquer in Hazleton, Pennsylvania

EDITOR’S NOTE: The original version was altered to acknowledge the Markle family’s contributions to the Hazleton Public Library and Penn State Hazleton.