A Walk Through My House 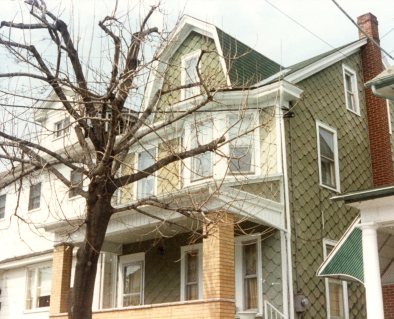 My family home was built in 1910 by my grandparents. (It was actually built during my great-grandparents’ time but they died before it was finished.)

A home that has been lived in for any length of time, especially by one family, takes on a “personality” all its own. And I don’t mean that in a “spooky” or “creepy” way! A house that’s been lived in for four generations becomes a family’s personal “museum” of a sort.

I’m 66 now, retired and have a lot more time to think and reminisce. I suppose that could be good or bad, depending on what it is you’re thinking about!

When I was born into this house, it was “only” a little over a half a century old, hardly a new home (it’s a late Victorian) but not really old either. The home is now 109 years old. It (and I!) have grown old together!

I can walk through the rooms and remember being a child here. My first wife and I lived here for 20 years until her death and our daughter was the fifth generation to be brought through its doors. My second wife also loved this house very much. She passed away this year.

There are memorabilia of just about everyone who lived in this house. Except for my father’s first wife, I have a picture in the den of everyone who’s lived here since it was built.

I can walk through rooms that remind me that my mother’s family once had that elusive commodity called “money” (that’s long gone!), but I can still see traces of it in cabinets filled with crystal and silver, china and various Victorian bric-a-brac.

There are portraits on the walls, most of people I knew and loved, some of whom I never met (but I’m sure would have loved, or at least liked as family!).

There’s the down side of it too. As I look at paintings and antique furnishings, I also see cracked plaster, faded wallpaper, and worn upholstery!

Scott Fitzgerald was once quoted as saying, “The rich are different.” I used to tease my mother by twisting that and saying: “The formerly rich are just plain weird!”

The writer Karen White once said that old family houses are more than just wood and bricks and stone. They store the collective memories of all the people who have lived there.

I believe that houses “give off” energy, either positive or negative. Overall, this has always been a “positive” house – good people, good times, parties, and laughter.

Of course, like all old houses, it’s seen its share of sadness as well as deaths, wakes, funerals, loss of children, parents, and spouses.

Maybe I’m picking up on this energy – or maybe it’s just that as I’m getting older, I realize the house and I are both eventually facing our own mortality.

I think I will probably be the last one of my family to be here. My daughter is single, has her own life, and the house will be too big for her and too hard to maintain. At my age, I can accept “genteel” shabbiness. I don’t want her to feel “trapped” here in a house she can’t afford out of a misguided sense of family loyalty.

Hopefully the house (and myself!) can pass into old age with grace and dignity.

Eventually, it will go the way of most old homes. Nothing lasts forever, but I would like to think that the memories of this house and the people who lived here will live on once the building is gone. As the Latin author says, “sic transit Gloria mundi” or in this case “sic transit Gloria domi.” Thus passes the glory of all old houses.

Patrick O’Neill was born in Shenandoah, but raised in Coal Township. He still lives in his family home, which was built by his grandparents in 1910. He has a Ph.D. in European History, an M.A. in Art History, and an M.Ed. in French. After 38 years of teaching, he recently retired from Penn State – Hazleton, but has plans to teach French part-time at a local community college. He started writing articles about the Anthracite Coal Region because it’s where he grew up there and he has always loved the area.